The 2nd Largest, and the Most Beautiful in the World

The Great Synagogue of Budapest (also known as the Central Synagogue) in Dohány Street is a good starting point to learn about Jewish Budapest.

Find out about the history and architecture of this wonderful Jewish religious monument.

You can also take one of the Jewish Heritage tours to visit the Dohany Street synagogue and related sights, incluidng the Jewish Museum.

The Jewish Quarter (district VII.) hides many treasures, so devote enough time to explore it.

Address: Dohány utca 2-8. in district VII., at an angle to Károly körút, between Deák tér and Astoria

Note: The Ticket Office closes half an hour before the synagogue’s closing time.

The synagogue is closed on the following days:

Visiting the Great Synagogue and the Jewish Museum

TIP:The best way to explore the Central Synagogue and the numerous other Jewish sights of the Hungarian capital is to join a guided tour.

There’s also a private tour option if you prefer smaller groups for a more personal and in-depth experience!

Admission to the Synagogue & the Jewish Museum & Archives:

Note: Men cannot enter the synagogue without a hat or cap.  You have to wear a small skullcap called kipah or yarmulke. You’ll receive one at the entrance after ticket inspection.

Jews were banned from the city in the 18th century, so they established a Jewish quarter just outside the old city boundary.

Remains of the old Pest city walls run on the opposite side of the road.

The Jews built their main synagogue in a residential area. Theodore Herzl, founder of modern Zionism was born in one of the buildings.

This stunning temple was constructed between 1844-59 according to Ludwig Förster’s plans.

The second largest synagogue (the largest stands in New York) in the world can take in 3,000 people.

Its Byzantine-Moorish style will fascinate you and remind you of monuments in the Middle-East.

The towers symbolize the two columns of Solomon’s Temple.

The seats on the ground-floor are for men, while the upper gallery has seats for women.

Surprisingly, the synagogue has an organ, though this instrument is used in Christian churches. The temple’s acoustic make it a popular venue for concerts.

The Germans established a ghetto for the Jews in 1944 that served as a gathering place for deportation.

Many people found refugee in the Dohány utca synagogue but thousands died during the bleak winter of 1944/45. Their bodies are buried in the courtyard. 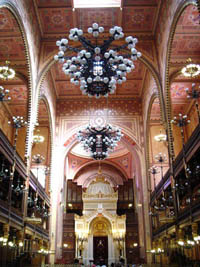 In the cobbled Raoul Wallenberg (Swedish diplomat who saved many Jews during WW II) park stands the Holocaust Memorial by Imre Varga.

It was erected in 1989 above the mass graves in the honour and memory of Hungarian Jewish martyrs.

On each leave of the metal weeping willow tree you can read a name of a martyr.

You can also see a piece of brick from the original ghetto wall in the garden.

Behind the main building stands the Heroes’ Temple that was built in 1929-31 to commmemorate the Jews who died in the First World War.

A restoration of Budapest’s Great Synagogue was finished a couple yeras ago, funded partly by a foundation set up by Tony Curtis who has Hungarian roots.

The adjacent Jewish Museum (on the left of the synagogue) has

The museum has the same opening hours as the synagogue. Visit the official website for more information.

Where to Eat near the Central Synagogue?

You’ll find some good eateries nearby including kosher, and non-kosher restaurants with fine Hungarian-Jewish cuisine. The area is literally packed with terraced restaurants and cafes.

TIP: Gozsdu Court, a series of arcades connecting Király utca and Dob utca is a real culinary centre with a couple of good-value pubs, cafes and restaurants:

Prices are a bit high but so is the quality of food and service.

The Spinoza also functions as a theatre, and gallery.

A bit run-down from the outside, this  family-run kosher restaurant has been operating for nearly six decades. Real kosher pastries and sweet treats.

The flódni is a must.

See also our page about Top Restaurants or our recommendation of Hungarian Restaurants in Budapest. 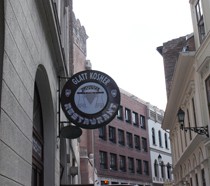 A bit touristy (=pricey) but the food is good in Carmel.

If you can afford it, try the Jewish specialties Carmel is known for:

The Hanna Ort Kosher Restaurant is located in the courtyard of the Kazinczy Synagogue, but entrance is from Dob utca, that intersects Kazinczy utca.

Hanna opened at the beginning of the 1960s and it offers traditional Hungarian and Jewish cuisine.

TIP 1: Visit the Jewish Summer Festival at the beginning of every September to learn more about Jewish culture. TIP 2: Take a walk along Kazinczy Street, Budapest’s trendiest nightlife spot, but also home to the Orthodox Synagogue of the city.
© Copyright 2005-2018, All Rights Reserved. www.budapestbylocals.com
Budapestbylocals.com