Note: The Opera House is closed due to reconstruction. Re-opens in 2021. Perfromances are hel in the Erkel Theatre (II. János Pál pápa tér 30, 1087)

The Hungarian Opera House in Budapest’s district VI. awaits you with rich musical programme throughout the year. 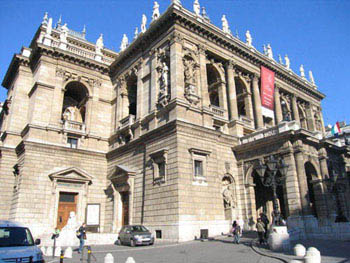 The architecture of the building in itself worth a visit.

Even if you aren’t an opera fan, a visit to the State Opera House is a must.

Located on the elegant Andrássy Avenue you’ll find numerous other sights, restaurants and cafes in the neighbourhood.

Guided Tours in the Opera House

Note: Tours are currently not available due to the reconstruction of the Opera House.

Visiting the Opera House, if you don’t have time to attend a performance:

The concert’s venue is the marble Main Staircase. The mini concert is optional, ticket costs 690 HUF.

Tours start at the main entrance.

Tickets for a guided tour:

Budapest’s Opera House will enchant you not only with its ballet and opera performances but its fine neo-Renaissance architecture.

The building fits well in with the similarly elegant neighbourhood on Andrássy Avenue. Hungary’s greatest Historicist architect, Miklós Ybl designed the building for the Millennium celebrations in 19th century.

Among numerous other buildings, he designed the Castle Bazaar and Royal Gardens in Buda, at the foot of the Royal Palace, that got nicely refurbished in 2014, The complex has been turned into a cultural and entertainment centre while preserving the historic edifices.

Construction started in 1875 and the building was finished in 1884. Ybl oversaw the work himself with painstaking care. 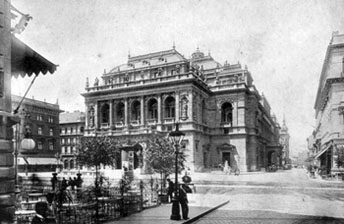 The building cost a lot of money, the auditorium was decorated with more than 7 kgs of gold. Hundreds of statues and paintings decorate the Budapest Opera House both inside and out.

Emperor Franz Joseph financed the construction, though he received little recognition for his generosity.

He in turn didn’t appreciated the architect’s work on the opening ceremony: “It’s very beautiful. I like it very much.” was all he said about Europe’s most magnificent and modern opera house. 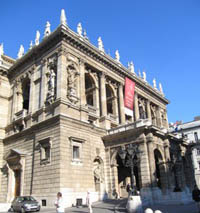 Seated statues of Franz Liszt and Ferenc Erkel, the first director of the Opera House stand on the sides of the main entrance.

On the right you’ll find the entrance for artists, while on the left there’s a carriage-way and entrance to the Royal Staircase.

In the niches at the first floor level statues of the four muses of opera reside.

The Interior of the Budapest Opera House

The interior boasts a impressive foyer with a double grand staircase, and grey marble columns supporting the arches.

On the ceiling you can see Karoly Lotz’s breathtaking frescoes depicting Olympus and the Greek gods.

A huge gilded chandelier hangs down from the ceiling. Every level has a different layout and decoration. Gold and red dominate the lavish auditorium that reflects elegance.

Do visit the buffet in the break not just for a glass of nice Hungarian wine, but it’s a splendid site in itself.

On the ceiling you can admire main events from Dionysos life. Landscape paintings by Árpád Feszty decorate the sidewalls.

During the reconstruction between 1980-84 the Opera House regained its original splendour to celebrate the 100th anniversary of its opening.

The Budapest Opera house soon became one of the leading cultural venues of Europe. Ferenc Erkel, composer of Hungary’s national anthem and founder of the Hungarian opera, was the first director.

Programs and Tickets to Opera Performances

You can choose from 50 major performances, including operas and ballets during the main season between September and mid-June.

Tickets are affordable, the price ranges from 400 HUF to 9,900 HUF. To get a good seat you’d better book in a couple of days in advance. Cheaper tickets are usually available until the last minute but they for seats with poor view of the stage.

Tips to buy ticket to the Opera and Ballet performances with a good view:

Where to Buy Tickets:

What to Wear in the Opera in Budapest – Dress Code

In Hungary people always dress up when they go to a theatre or to the Opera. Women usually wear nice evening dresses, while men wear dark suits.

Wearing jeans and a T-shirts doesn’t mean that you’ll be sent home from the entrance, but it’s not nice to feel out of place because of your clothes.

My advice is that put on something simple, but elegant. Make sure though that you feel yourself confident and comfortable in your dress.

You can buy your opera tickets online on this page.

Walk along the sycamore tree-lined Andrássy Avenue, and you can admire fine villas, elegant palaces and buildings of cultural importance.

Charming squares, like Jókai Square or Liszt Ferenc Square lie on both sides of the boulevard with benches inviting you to have a rest and restaurnats to have a meal.

Andrássy Avenue also offers plenty of cafés and restaurants, if you feel like having a hot drink with a cake or something more substantial.

The beautiful Drechsler Palace opposite the Opera House today is the home of the Hungarian Ballet Institute (planned to be turned into a luxury hotel in the near future).

Because of the numerous places of night life entertainment, like the Moulin Rouge and various theatres and the Operetta Theatre, the street has been long called Pesti Broadway.

The recently renovated Ferenc Liszt Academy of Music offers an alternative to a night at the opera.

It has a large concert hall with excellent acoustics. Besides its classical music performances, the Art Nouveau building represents another good example of Budapest’s great architecture.

From here continue strolling on Andrássy Avenue, and on its end you’ll reach the imposing Heroes’ Square with the Millennium Monument and the City Park behind it.

TIP: see a guide to other main attractions in Budapest.

Events at the Opera

Nutcracker Festival in the Advent Period, end of November, 2017

To Opera House’s most awaited performance is the Nutcracker/Diótörő by Tchaikovsky each year. There will be 26 performances of the ballet between 01 – 30. December.

The Opera House celebrates the series of the prominent performance with a special Nutcracker Festival in front of the building.

Where to Eat Near Budapest Opera House?

Andrássy Avenue offers a wide selection of fine restaurants and cafés, moost of them with outdoor terraces. Here are some of our favourites:

The Callas cafe is the most obvious choice, housed in a 19th century neo-Renaissance palace right next to the Opera House.

A stylish cafe with Art-Deco design by David Collins (his most famous works include Madonna’s apartment, the Gordon Ramsay and The Wolseley restaurants in London) offering excellent food, and delicious cakes.

There is also breakfast. An ideal place for a cocktail before an opera performance. 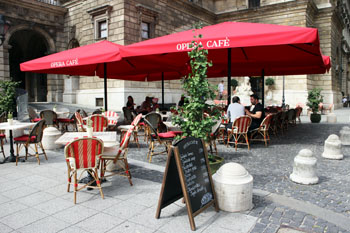 This small 19th-20th century style coffee house and bar opened in 2015 on the ground floor of the Opera House at the side of the facing Hajós Street.

You can enter both from the street and inside the Opera.

It has a spacious terrace from spring to end of autumn (depending on the weather9 facing Andrássy Avenue .

The cafe is quite small but still manages to evoke an old-world coffee house ambience. with red, black and gold colours dominating the decor.

Excellent coffee from specialty beans, fine champagne and local wines (from the Kreinbacher Estate in the Somló wine region), a bistro-style menu and scrumptious cakes.

Try the classic Opera Cake, but there’s tiramisu, cheesecake and other delights.

A slice costs 900 HUF, a bit expensive but it is to be expected in this chic neighbourhood. Sit on the terrace to enjoy the view of the boulevard.

A bistro offering seafood dishes in city without sea.

You pick a fish, crab, oyster from the counter and the staff will prepare it for you.

You can also have pasta dishes and soups

Although both the coffee served here and the service seemed better days a while ago, its grand interior decor is worth a visit.

The cakes and tortes are scrumptious though: try a slice of Dobos torte, or Andrássy cake, Gerbeaud or Eszterházy cake.

With old prints and photos about Budapest it combines the atmopshere of bygone times with modern bohemian ambience.

It serves the popular Művész cakes, all sorts of coffee drinks and a wide variety of cocktails.

See other coffee houses in Budapest.