From the country’s varied culinary repertoire Hungarian goulash is the most famous and often cooked dish outside the borders of Hungary. 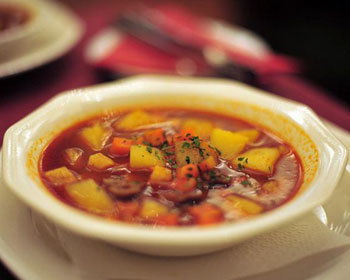 Still many confusions and misconceptions surround its exact preparation method. 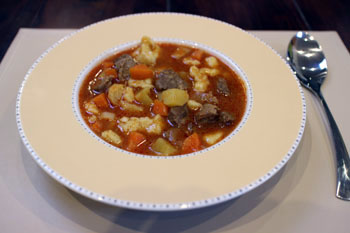 Authentic gulyás is a beef dish cooked with

Potato and noodles (csipetke in Hungarian) are also added according to some recipes.

Hungarian goulash is neither a soup nor a stew, it’s somewhere in between.

Though in Hungary it’s considered rather to be a soup than a stew, so look for it among “Soups” on restaurant menus.

If cooked in the proper way, goulash has a nice and evenly thick consistency, almost like a sauce.

In Hungary gulyás is eaten as a main dish. Noodle or pastry dishes, especially the ones made with cottage cheese (túrós csúsza, túrógombóc, strudel) go down well after the heavy soup.

Taste it on a Bike Tour!

Ride to the city’s famous sights on bike, lead by friendly, expert guides and have a a bowl of steaming goulash soup in a charming garden restaurant. 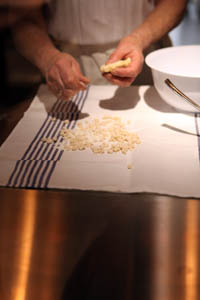 Pinched noodles added to goulash or bean soup in Hungary.

Csipetke comes from the word csípni, meaning pinch in English, referring to the way of making this noodle):

Goulash is hearty enough without csipetke, especially if you eat it with bread, so you can leave csipetke out.

1. Heat up the oil or lard in a pot and braise the chopped onions in it until they get a nice golden brown colour.

2. Add the beef cubes and and sauté them till they turn white and get a bit of brownish colour as well.

3. Sprinkle the braised onions and meat with paprika powder while stirring them to avoid getting the red spice burnt.

4. The meat will probably let out its own juice. Let the beef-cubes simmer in it while

Pour enough water to cover the content of the pan and let it simmer on low heat for a while.

5. When the meat is half-cooked (approx. in 1,5 hour, but it can take longer depending on the type and quality of the beef), add

You’ll probably have to pour some more (2-3 cups) water too.

6. When the vegetables and the meat are almost done add

Let it cook on low heat for another few minutes. You can remove the lid of the pan if you want the soup to thicken.

7. Bring the soup to the boil and add the csipetke noodles.

It needs about 3-5 minutes to get cooked. Add some more water and salt if necessary.

How to Make the Csipetke: 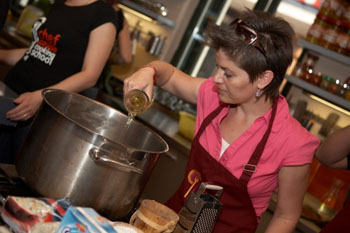 TIP: Learn how to make traditional Hungarian dishes like goulash in a modern cooking school in Budapest’s center.

The course is a fun way to learn more about local gastronomy from young, talented chefs. A visit to the famous Great Market Hall can also be included.

You can reserve your Hungarian Cooking Course online.

Many gulyás variations have been created throughout the years and became popular in Hungarian gastronomy:

A bit of Goulash History

This thick, hearty dish was (and still is) a very popular dish among herdsmen in Hungary. They made it in a cast-iron kettle hung above open fire, out in the fields.

Herdsman is gulyás in Hungarian, so that’s where the dish’s name comes from.

Herdsmen had the best ingredients at hand (most importantly prime quality beef) and the preparation method fitted very well to their work and lifestyle.

They didn’t have to stand by the side of the kettle and stir its content all the time, but still had a tasty and hot meal to fill up their stomach.

This peasant dish got on the noblemen’s and town folk’s table only towards the end of the 19th century, prompted by the raising national awareness throughout the country.

From the Fields to Restaurants

In the second half of the 1800s it became very important to protect treasures of Hungarian culture: the language and the gastronomical delights, as part of the movement to emphasize Hungary’s national identity and independence from the Austrian Habsburg dynasty’s rule.

Restaurants started to put goulash on their menus too.

By the second half of the 20th century, the soup became the number one dish of Hungary that every tourist coming to the country must try.

In English gulyás became goulash, and in some parts of the world stews and casseroles are called goulash too.

Where to Eat Goulash in Budapest?

TIP: Hungarian Dinner with Folk Show: have a 4-course dinner of typical Hungarian dishes, including goulash made from grey cattle beef, in an elegant restaurant accompanied by a 30-minute folk music & dance program.

A  great combination of good, local food/wines and cultural entertainment:

Every Friday at 19.00 in a centrally located restaurant.

Traditional Hungarian restaurants all have goulash on their menus.  Browse our list of Hungarian Restaurants in Budapest.

Other recommended restaurants where you can have a bowl of steaming Hungarian goulash: 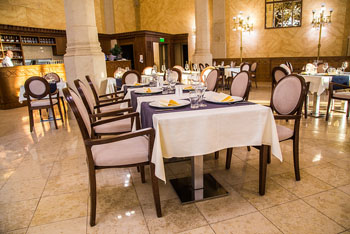 The renewed, historic building of the Vigadó Hall is not only a place of cultural entertainment but houses an elegant restaurant with reformed, contemporary local cuisine.

TIP: For dessert try the cottage cheese balls covered in honey gingerbread crumbles or the floating islands (madártej) for 800 HUF.

A highly recommended place to savour local dishes in a stylish, historic setting. 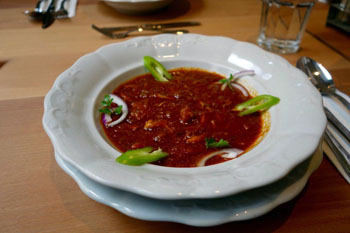 A 3-course daily menu with a glass of fröccs or fruit syrup with soda is just 1 300 HUF.

They have Alföld-style goulash for 950 HUF, but they’re mostly known for their stews made from beef, chicken or venison, veal liver, mushroom or bean (prices vary between 1 920 – 2 880 HUF) 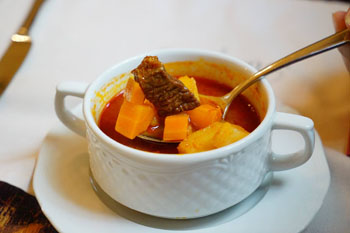 A charming, traditional restaurant in the Lipótváros neighbourhood of Pest, with

They have Babgulyás (goulash with beans) on the menu for 900 HUF. Their Fishermen’s soup is also good (1 500 HUF). See full menu here. 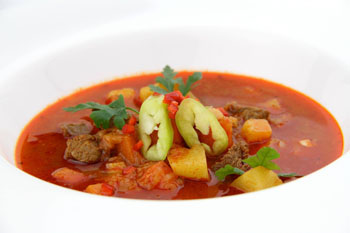 A popular restaurant with Hungarian-Jewish cuisine near the Keleti Railway Station, a bit pricey though.

A pleasant place with a nice terrace in the historic castle area near Fishermen’s Bastion.

Goulash is 1 720 HUF here and though it might not be as good as in gettó Gulyás but hey it’s in the centre of the city’s most-visited area.

Baltazar is a 11-room luxury boutique hotel in the Castle District with a fine grill restaurant and wine bar.

Goulash is a main dish here, served with homemade bread.