A Historic Building and Luxury Hotel in the Bustling City Centre 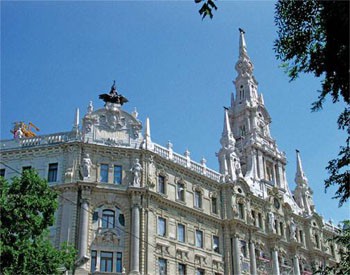 Walking along Erzsébet körút on Grand Boulevard, the soaring building of New York Palace Budapest will catch the eye.

The opulent edifice was built at the end of the 19th century and housed the legendary New York Cafe frequented by the elite of Hungary’s literary world.

Circa 100 years later New York Palace Budapest stood in ruins devastated by the two world wars and the negligence of the communist regime.

An Italian hotel chain, the Boscolo Hotels came to the rescue of the palace in 2001. They invested in around 80 million EUR to renovate the dilapidated building and turn it into a lavish 5 star hotel that opened in 2007.

After a few months the the opening of New York Palace Boscolo Hotels the elegant New York Cafe reopened, too.

Today the Palace shines in its original glory, providing luxury hotel rooms, exclusive shops in Budapest’s buzzing city centre. Even if the room rates are out of your budget do drop by Erzsébet körút and take some photos of this architectural gem.

History of the New York Palace

The New York Insurance Company commissioned the building of the palace in 1894 based on the plans of architects Alajos Hauszmann, Flóris Korb, and Alajos Giegl. 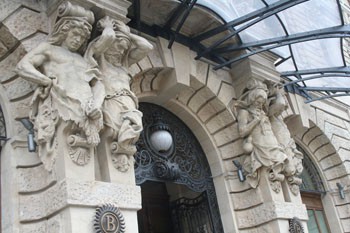 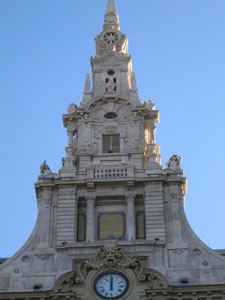 At the turn of the 19th-20th century Budapest boasted about 500 coffee houses, the New York Cafe having been the most exclusive of them. 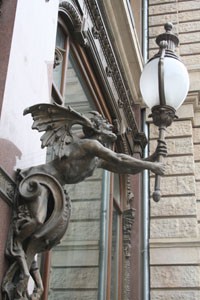 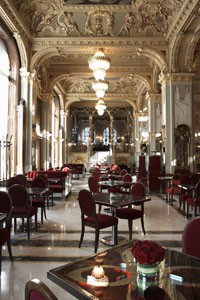 New York Cafe, occupying the ground floor, soon became known as “the most beautiful cafe in the world”.

The bronze statues illustrate El Asmodai the ancient symbol of coffee and meditation.

Either the magic of the ancient symbol or the lavish ambience drew the most prominent figures of Hungary’s literary and art world in the 19th century and in the early 20th century.

Writers, poets, and journalists frequented the cafe not only to sip coffee but to catch up on the latest news in Budapest, and seek inspiration in the dazzling environment.

In 1908 the editorial staff of the famous literary periodical the “Nyugat” started to held their meetings in the cafe.

Just to name a few of the cafe’s famous guests: Kálmán Mikszáth, Endre Ady, Dezső Kosztolányi, Gyula Krúdy, Zsigmond Móricz. They even wrote and dedicated a poem to the coffee house:

Besides poets and writers, the cream of the theatrical life and movie world also loved the place. 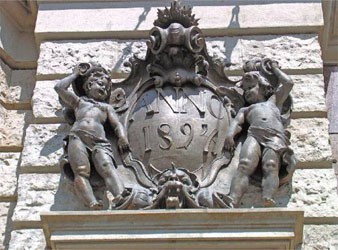 The 1st world war put a temporary end to the flourishing of New York Cafe that was revived for a short while in the 1930ies.

Sensing the threat of a 2nd world war, the Cafe closed. The bombing of Budapest in 1944-45 awfully damaged the fine building.

It reopened in 1954 under the name Hungária but instead of artsy people, guests of the cafe consisted of yes-men of the communist regime. During the 1956 uprising a Russian tank bulldozed into the edifice.

The Boscolo Group did an amazing job by breathing life into the neglected New York Palace Budapest once again, though many have criticized some of the design elements.

In the rest of the palace offices of the insurance company resided. The interior was decorated lavishly using exclusive materials like marble, bronze, silk, and velvet.

Gilded stuccos dazzled visitors even in the the ladies’ room. Guest of the New York Cafe could while away in two game rooms separated by a huge glass wall on which Japanese, Turkish, baroque and renaissance elements were painted.

The grand opening was held in 23rd October 1894. It’s interesting that 2 other former insurance company headquarters were renovated and turned into luxury hotels in Budapest: the Four Seasons Hotel Gresham Palace, and the Adria Palace (today the Le Meridien Hotel). 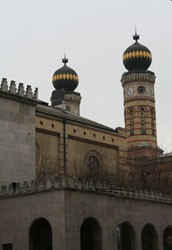 Just turn into Dob utca and you soon reach the heart of the former Jewish Quarter of Budapest with the Central Synagogue in Dohány utca. 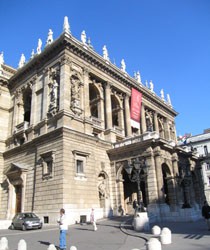 If you walk a few block north, along Grand Boulevard (Nagykörút) you’ll reach Oktogon – a an octagonal shape square – where Andrássy Avenue lined with elegant buildings, bisects the Boulevard.

You can either turn left and continue walking to see Budapest’s Opera House, or turn right to end up at Heroes’ Square.

TIP: To save time and if you don’t feel like walking you can take the M3 (yellow) metro, the nicest of Budapest 4 underground lines.

Behind Heroes’s Square sprawls City Park (Városliget) with attractions like the Budapest Zoo and Botanical Gardens. 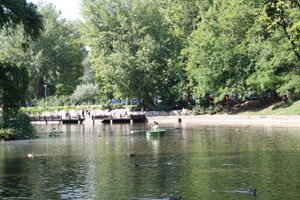 Lake in Budapest City Park – it’s an ice rink in winter, while in summer rowers dot the calm surface of the water.