One of the Best Pedestrian Streets in the World 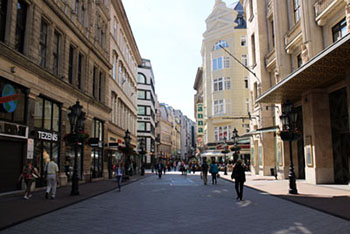 Váci Street in downtown Budapest is one of the world’s most attractive pedestrian shopping streets not only according to Hungarians.

Pest’s famous Váci utca reached the 7th spot among 16 pedestrian shopping streets in a contest, the aim of which was to rank the streets by comparing several factors including:

The street received 76 points out of 100, outrunning well-known pedestrian streets of Paris, Amsterdam, and Milan. So if you visit Budapest do take a walk along this famous downtown street.

Getting to Váci Street

The street starts at Vörösmarty Square and ends opposite the Central Market Hall at the Pest end of Liberty Bridge.

You have several options to access the street, especially if you stay at one of the city center hotels.

Since Váci stretches parallel with the Danube, you can reach the river side through small side streets. 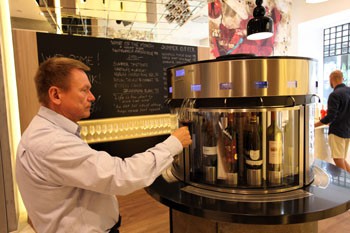 The kind sommeliers tell you all you want to know about the wines, vineyards, and tasting notes while you pour wines from the sleek wine dispensing machines placed around the room.

Some really excellent bottles can only be tasted here, at CultiVini (Villa Sandahl Capuccino Oil 2011).

Tasting programs with sommelier guiding and snacks (ham, cheese) for individuals or gropus can be reserved online.

A Bit of History

In the medieval era the boundary of the city stretched there, along Deák Ferenc utca was the city wall.

The predecessor of today’s Váci street lead the Váci gate which stood on today’s Vörösmarty Square.

You can still see the remains of the gate at the beginning of the street, a few steps from Vörösmarty Square.

White stones line the outline of the original gate bastion and a tablet on the wall shows what the edifice looked like. 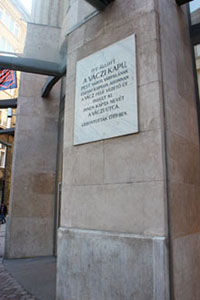 The street became a main thoroughfare of Pest in the 18th century.

Until the 1880-ies the main Promenade of Pest (Korzó) was the walkway lining the Danube between Eötvös Square and the Vigadó Square.

By the turn of the 19th-20th centuries Váci utca took over the role of shopping street from Király utca, and the role of promenade from the Korzó on the Danube embankment.

Most of the protected buildings date from this period.

A marble plaque saying: the northern gate of Pest’s city wall, the Vaczi kapu stood here, demolished in 1789. The street was named after it.

TIP: Besides window shopping, try to glance upwards occasionally to admire the artistic facades of the buildings.

For example, the building at at No. 9 was an inn that József Hild, the renowned architect of the era, rebuilt, and where the 11-year old Mozart gave a concert.

How to Explore Váci Street?

The esplanade is a bit long from end to end but it’s broken up by tiny squares (Kristóf tér, Szervita tér), and small passages.

The northern part of the street is the more touristy part which is teeming with people during summer, and before Christmas during the Christmas fair on Vörösmarty Square.

In early spring or late autumn the street is more peaceful.

I recommend to start from Vörösmarty tér, and walk down to the Central Market Hall.

Before starting your exploration you can have a cup of cafe with a slice of cake in the famous Gerbeaud Confectionery on Vörösmarty tér.

Just a few steps from the white marble statue of poet Mihály Vörösmarty you’ll be among promenading tourists on Váci utca.

Terraced cafes line both sides of the street.

The neighbourhood is geared towards tourists, so the shops, and cafes are a bit overpriced.

The palette of shops is varied. 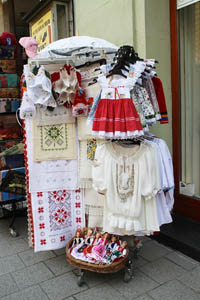 The building where the Pesti Színház operates today was once an inn.

The Philanthia flower shop that has been operating since 1906, boasts a beautiful sculpted facade. The enhcanted, slightly quirky interior is mostly original.

The Thonet house next to it is a fine example of Art-Nouveau/secession architecture adorned with Zsolnay ceramics and designed by Ödön Lechner. It dates back to 1890. It was the first modern urban retail shop of the city managed by the successful Thonet family.

The oldest building of Budapest stands at the corner of Régiposta utca, a small side street at the Hermes Fountain (see photo above).

One of the first McDonalds and McCafe-s in the city operates in Régiposta street too.

At the former Taverna Hotel you reach the southern part of Vaci utca which has a more relaxed atmosphere and less crowd.

At the corner building at Váci utca 43, a bronze plaque commemorates that Charles XII king of Sweden took a rest there during its 14-day trip from Turkey to his home country.

On the corner of Nyári Pál utca stands the Church of Saint Michael (Belvárosi Szent Mihály templom) a Baroque temple from the middle of the 18. century.

The church hosts the Baroque Music Festival in autumn as well as organ recitals on Wednesday and Saturday.

Due to its central location and fame you can find a good number of hotels both in the street and in its close vicinity.

Here some hotels that are situated directly in the pedestrian street:

The hotel has its own restaurant and confectionery with an open terrace during warm weather welcoming non-hotel guests.

See other budget hotels in downtown.

TIP: There are a couple of good hostels in and around Vaci Street like the Animation City Hostel.

The street is packed with restaurants, cafes and bars though most of them are overpriced which is not justified by the quality of meal or services.

Here are some good places to try with quality food and reliable service.

The famous American cafe chain with burgers, cheese cake, cobbler, shakes and other classics. There’s a menu for kids.

The Rock Shop is on the ground floor if you’re interested in music memorabilia. 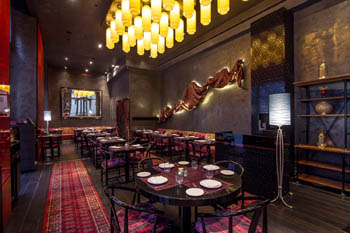 An outstanding restaurant with real Middle East cuisine and hospitality inside the Buddha Bar Hotel.

Nice terrace even in winter.

Stop by this excellent waffle bar for a late breakfast or pre-lunch snack.

A basic waffel is 550 HUF to which you can add various toppings for 200 HUF/topping:

The waffle was a bit too sweet to my taste but the kids wolfed it down. The Nespresso coffee drinks are quite good. 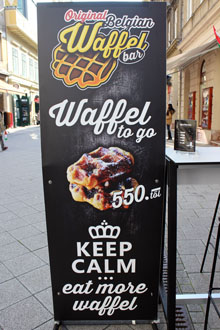 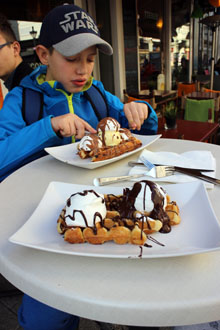 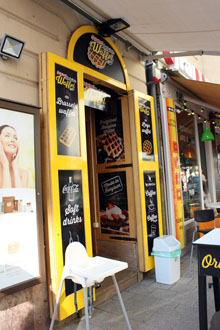 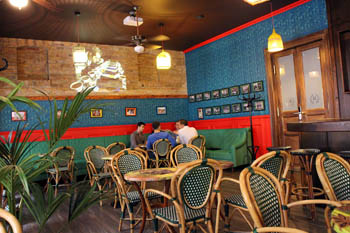 A local cafe chain owned by a former TV reporter (now a thrilelr writer) Tamás Frei. Coffee is good, comes from their own roaster.

They also have hot chocolate, delicious cakes and artisan ice cream in exciting flavours. Terrace on the street in fine weather. Prices are friendly. 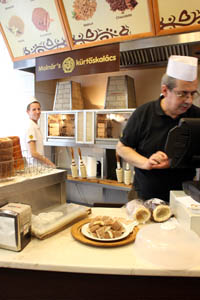 You can get this delicacy at every fair, market, and festival the main ones being:

The cafe is a bit touristy to my taste but the cakes are good, the coffee is decent. Not too spacious inside. A piece of Kürtös cake is 990 HUF (it’s quite big), cappuccino is 450 HUF.

The free Budapest tour with the city card exploring the Pest side departs from the cafe, every day at 10.00 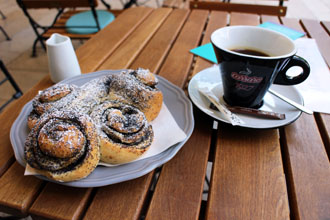 This charming cafe is located in the vaulted passage connecting Váci Streeet with Március 15. Square.

Gorgeous view from the terrace to Erzsébet bridge and the Danube. 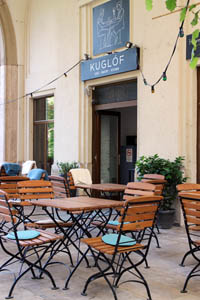 Note: Some of the worst restaurants of Budapest are in Váci utca:

Restaurants to Avoid in the Street

Overpriced place with a run-down interior. Food is average.